Midnight sun on the Lofoten Islands If you want to experience the midnight sun on the Lofoten Islands high in the north of Norway, you have exactly 76 days to do so. Every year between the end of May and mid-July, the sun is on the horizon for 24 hours a day – the exact opposite of wintertime, when the sun does not rise at all for some time during the polar night.

But how exactly is this phenomenon of the midnight sun created and how is it that we can get sunburned for 24 hours? We start our exploration at the Norwegian Polarsirkelsenteret.

If you cross the Arctic Circle in northern Norway, you will find yourself in an inhospitable plateau, north of Mo i Rana and south of Fauske. Nordland. At an altitude of just under 700 meters, we are unmistakably reminded that we are now crossing the 66th parallel and are thus only a good 2600 kilometers from the North Pole. To the south, the same thing; here, too, the southern polar circle marks the area where the sun does not set during the summer months due to the rotation of the earth.

The position of the polar circles is not fixed, it varies by almost 15 meters from 365 days, because their exact positions depend on the angle of the Earth’s axis in relation to the plane of the orbit. The Earth’s axis is inclined with respect to its orbit around the Sun by 23.27 degrees. This effect (also known as the obliquity of the ecliptic) is responsible for the fact that on our Earth, in both the southern and northern hemispheres, we can experience four different seasons each year – spring, summer, autumn and winter. And it is also responsible for the fact that now, as we continue our journey northward, we will no longer experience a sunset thanks to this inclination, since the sun’s rays always strike the earth’s surface at least at a shallow angle.

Night turns into day and sometimes day turns into night. At least figuratively, because how does that affect our sleep rhythm?

Sleeping in the midsummer night

Our normal biorhythm follows a relatively simple pattern: light means awake, dark means asleep. In Central Europe, we are already set to this rhythm in childhood, and apart from shift work or party nights, we maintain it.

Responsible for the functioning of this rhythm is a hormone called melatonin. Normally, melatonin production is increased towards the afternoon and leads to corresponding tiredness and the desire for sleep in the evening. If, on the other hand, there is a melatonin deficiency, we do not get tired – but this sometimes has long-term consequences for our health and well-being. So are all people north and south of the Arctic Circle sick?

Maybe it’s the breathtaking landscape of Lofoten, the midnight sun, or the heavy stomach due to the Kanelbullar you’ve eaten – in any case, the usual sleep rhythm quickly gets out of whack once you’ve spent some time in the land of the midnight sun. Between 9 p.m. and 4 a.m. in particular, photography enthusiasts will build up a sleep deficit, and the culprit is the light. For seven hours, so to speak, the golden hour prevails: golden sunlight and long shadows. The camera is in constant use, the photographer too. The bed: empty, only when tiredness takes over, the organism is forced to rest and one lies down. But woe betide us if we wake up in the middle of the night and find that the light is already (or still?) the best for photography.

In Nordic countries (and thus also in Lofoten), we accordingly find dark, light-proof curtains in almost all bedrooms to enable an appropriate sleeping rhythm in the first place. As a tourist to disrupt his rhythm for a few days or weeks is one thing. However, living here requires a certain discipline when it comes to dealing with daylight nights. If we take this into account, we can also get our melatonin production under control and can still enjoy the long midsummer nights, because: sunlight makes you happy and is therefore also important for our health.

While we humans can hang curtains, animals don’t have that choice. So how do the vast amounts of wildlife in Nordic countries deal with the midnight sun?

The biological clock of animals

A few years ago, a team of researchers accompanied reindeer in northern Norway and on Spitsbergen and researched the effect of the midsummer night on their biorhythms. Their finding: during the midnight sun, the animals’ sleeping and eating rhythms also become unbalanced and take place randomly during this time. By contrast, as the sun began to set again in the fall and into the spring, the animals’ behavior returned to normal and their internal clocks ticked in rhythm with daylight and night. According to the researchers involved, it is reasonable to assume that this behavior also applies to other animal species.

So if your visit to Lofoten takes you there for the wildlife, you don’t have to worry: the chances of seeing reindeer, moose or other species are good even during the midnight sun.

But what influence does the light of the midnight sun have on photography? This much should be said in advance: it’s positive throughout.

Of course, the same rules of thumb apply in Lofoten as everywhere else. Light is everything, harsh daylight rarely looks good, landscape photography lives through the depth effect in the image. While depth comes almost by itself through the picturesque landscape of Norway and Lofoten in particular, the midnight sun has a consistently positive effect on light. The golden hour turns into golden hours, long and interesting shadows are everywhere – provided the weather is right. Lofoten is not a fair weather paradise, longer periods of bad weather and storms have to be taken into account. This does not have to be a bad thing, the briefly breaking cloud cover can provide spectacular light conditions. Especially in the evening, the low sun in the west often finds a small cloud window through which it can send its rays.

The location should be chosen carefully, because from about 9 pm the sun is low in the west and moves over the north during the night to the northeast. The west coast of Lofoten is therefore more suitable in the evening, eastern locations can then be in the shadow of the mountains, a precise check in advance is recommended.

But also in the east there are tons of photo spots that are more than worth a visit and score points especially because of their shadier location. The Norgeskart, Google Maps and StreetView as well as pictures of other photographers can help us to find suitable locations.

An effective protection against mosquitoes is recommended, especially by the swampy and watery landscape, the animals can otherwise ruin every photo and we are faster on the run again than we would like. The headlamp, however, may confidently stay at home.

Not to be underestimated is also the wind, which can unleash an immense force. Trust in the tripod is good, holding on is sometimes better, otherwise the expensive equipment lies in the Atlantic. The tripod also helps to take blur-free pictures despite a strong storm. 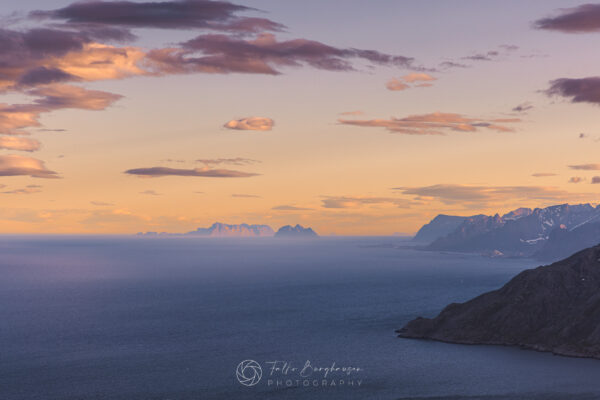 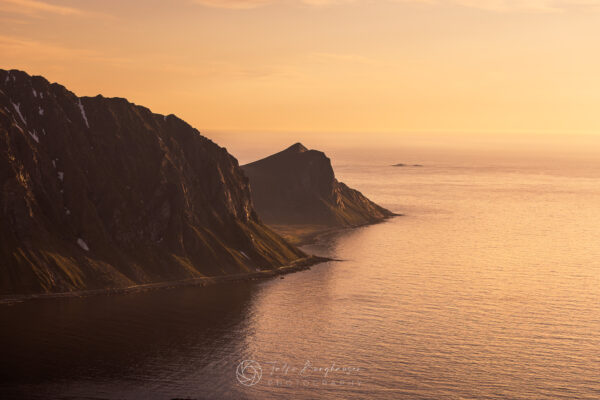 In the distant north 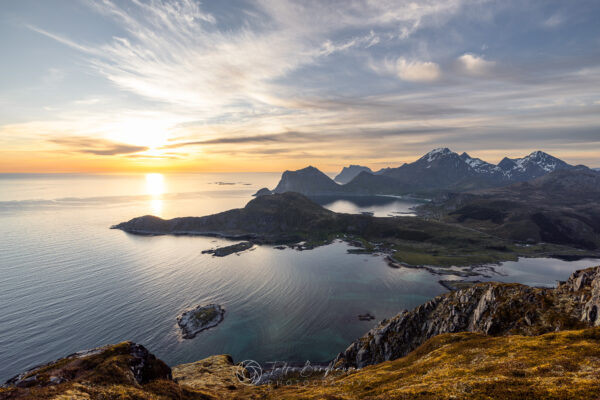 Midsummer night on the Lofoten

More than worth a visit: Lofoten in the midnight sun

Whether for photography or for hiking, it will probably not remain with one visit. The unique landscape of Norway with its rugged coastline captivates us too much. Sandy beaches alternate with rocky precipices, nestled between gentle hills and rugged granite peaks. In addition, there is exclusive light from the midnight sun, including a guarantee of long nights with little sleep. If we follow a few basic rules, however, this will not upset our biorhythms in the long term.

The only confusion is when reviewing the photos, because which ones should we sort out, when we almost always find perfect light to photograph between the evening and morning hours?

Falko Burghausen
Professional landscape and ArtWork photographer and remote-first Software Engineer and CTO. Falko goes almost nowhere without his camera and loves to travel between high mountains and ocean waves to capture grandiose landscapes. He is a firm believer in Work Anywhere and digital working models and finds that a day without chocolate can only be half as good.

We have stories about travel and being outdoors that inspire, photo knowhow that gets you ahead, and we discuss all things about New Work.
Regular, but not too often. Informative and definitely not spam.

We respect your privacy and do not tolerate spam and will never sell, rent or give away your information to any third party.

Wildlife Photography and ibex in Switzerland – We set out in the Engadine with a telephoto lens around Piz Albris near Pontresina to photograph ibex. 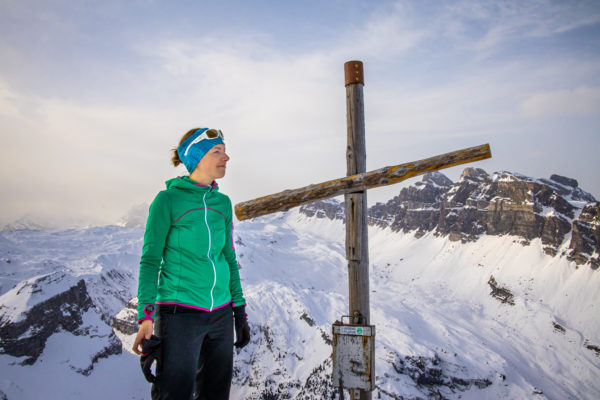 Our planned wild ride becomes a leisurely excursion: instead of the Rossgrat we climb the Firsthöreli in the Bisisthal.