What actually is a Fjell in Norway?

The Norwegian word Fjell corresponds primarily to the German term for mountains. However, due to the unique and different topography in the Norwegian mountains compared to the “classic” mountains like the Alps, it is also often used colloquially to describe the typical barren and treeless highlands in Norway or even Sweden (Fjäll).

The vegetation often consists of only a few trees such as some birches or conifers. Primarily plants close to the ground, mosses and grasses as well as heath landscapes characterize the landscape. The rounded landscape of the Fjell, with only a few differences in altitude compared to the rugged shapes of the Alps, is characterized by glacial movements and, depending on the region, is also interspersed with many smaller and larger lakes.

In Norway and Sweden, fjell landscapes often have little infrastructure. Characteristic are the partly dead-straight roads, drawn like with a ruler, which cross the area. Extensive fjells such as the Hardangervidda in Norway are a popular hiking and trekking area. However, due to the long distances and the exposed altitude, these areas must also be visited with appropriate equipment and preparation, as there is hardly a comparable and dense hut infrastructure as in the Alps.

Where can you find Fjells?

The typical landscapes are not necessarily found only in Norway, where this landscape photo was taken. Sweden and the northern part of the British Isles with Scotland also have very similar landscapes. And even in the Alps there are partly smaller regions, which I personally would describe as Fjell, but this may not be geologically correct.

Since this photo is from Norway, I will limit myself here to this vast country. In Norway, fjells can be found in quite a few regions, as two characteristic examples I would list Jotunheimen National Park and Hardangervidda in the southern third of Norway. Both regions are situated at altitudes between 800-1200 meters, with individual mountains also clearly exceeding this mark. Jotunheimen is home to Norway’s two highest mountains, Glittertinden and Galdhøppigen, both of which are over 2400 meters high. But also in northern Norway and Sweden there are many regions that fall into the category of Fjell. It has happened to us not infrequently that the road during the travel stage through Norway has led us abruptly and a few curves later into exactly such barren highlands, which we would not have expected there at all.

Landscape photography thrives on depth effect in the image. An important element to be able to achieve this depth effect is the sky – ideally when it is covered with interesting cloud shapes. Now, unfortunately, we have no influence on whether and when clouds appear in the sky – and that’s certainly a good thing.

During our overnight stay in the Norwegian Fjell by van in the region of Nore og Uvdal, we encounter the best weather, a cloudless sky and colorful vegetation. Due to the elongated, flat ridges in the landscape, I am missing elements for the composition of the picture when looking for a suitable motif on this evening in September: a craggy mountain, a gnarled tree or imposing cloud shapes in the sky. After some wandering around with camera in hand, I finally have to settle for some colorful mosses and the glowing evening sky.

I try to set up my image so that the progression of the lichens and shrubs with the mountain ranges on the horizon creates a certain depth effect. The deep blue to orange sky contributes its part to the fact that the component light does not come too briefly. The purple moss on both edges of the image provides a splash of color and although purple, orange and blue are not directly complementary colors, I’m quite pleased with the result. Now, if only there were some light streaks of clouds in the sky… But I don’t need to pursue that thought any further, there’s not a little cloud to be seen far and wide, and in a few minutes the darkness will take over anyway.

Beside the falling night I am glad to be finished with my photo of a Norwegian Fjell landscape for another reason: Mosquitoes. From my perspective just such an invention of the rather superfluous kind. How do the Norwegian trolls stand it with these critters, I think to myself, while I pack up my tripod and camera and make my way back to the van. But probably they just don’t act like me. 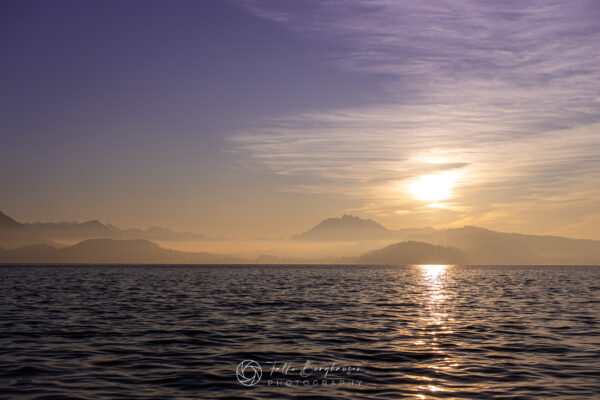 Lake Zug and a beautiful sunset – a promising combination, since the city is located on the eastern shore of the lake with a wide view to the west, where the sun sets. 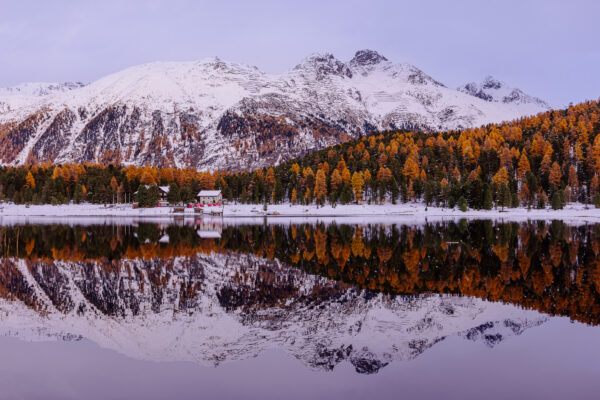 Golden larches in the Engadin at autumn time

The golden larches in the Engadine are an indescribable, colorful natural spectacle in autumn. In our article we give all photographers tips and information for the next visit to this unique region.